​
The evening of Friday November 13th, an Executive Order by the Governor was posted that would essentially shut down the Nation’s Gun Show.   The lawsuit hearing is taking place at 10 AM on Thursday.  Most of the work on the lawsuit has already taken place and the two teams of lawyers continue to work.  We have filed a lawsuit in Fairfax County to get a temporary injunction to allow the show to continue this weekend. It is our hope to get this building opened back up so that more events for the community can take place. The legal expenses are estimated to cost roughly $35,000.

The show takes months to put together and it is too late a notice for most of these businesses to recoup their losses. It will cause irreparable damage to all involved from the building, auxiliary businesses, the exhibitors, the promoter, the hotel, convenience stores, restaurants, and the strip mall. Exhibitors have significant investments in inventory, as do restaurants and convenience stores, much of which cannot be recouped. Please donate to the GoFundMe below to help us fight to protect these businesses.

We, the exhibitors, building staff and public have been very vigilant and gone above and beyond the state required COVID-19 safety measures. We have already had two shows with no known spread of COVID to exhibitors, staff or public. We are in a building more than 50,000 Sq. Ft. larger than the Walmart across the parking lot which remains open. We operate as a similar business model only temporarily in retail commercial business.

Thank you for your patience and we apologize for any inconvenience. As soon as we have a verdict we will post on our websites and on social media.

The Nation’s Gun Show is canceled this weekend, November 20, 21 & 22 at the Dulles Expo Center. Yesterday morning we were given then all-clear from Fairfax County Health Department who reasonably listened to our arguments from Monday and Tuesday, then called back to say we could operate as a brick and mortar retail establishment. Then much later that day the Governor and the Virginia Attorney General stepped in to close all the similar venues in the state of Virginia as well as ours inflicting incredible hardships in the entire state. We fought back and went to court at great expense and lost. We respectfully disagree with the judge’s opinion.

We will follow up with more later. We are very sorry for the incredible financial burden and terrible inconvenience this is inflicting on all involved.

Late yesterday Attorney General Mark Herring sent out a press release in response to the lawsuit that we filed in Fairfax county to allow us to open this weekend. He claims that we will be a super spreader, that we have a blatant disregard for the Covid virus, and that we could cause damage to the community. We are simply asking to be open like the Walmart is right across the parking lot from us and other Walmarts all over the state.

If you ever go into any Walmart there is usually an average of 400 people inside at any given time. Let’s say they’re only open 10 hours a day, that means 4,000 people per day. We are open three days and will have 4,000 people, maybe, per day which adds up to 12,000 people for the weekend. That is the same number of people that went through the show in August this year, and we had a third less than that at the show in October.

We just want to be able to operate on the same business model that Walmart is. We are arguing that we be classified as business retail under brick and mortar, and not entertainment and amusement. They are taking a broad brush across the state and labeling all event centers this way. Many people and businesses have been damaged and deemed nonessential. The Nation’s Gun Show is a place where like-minded people can get together to buy, sell and trade firearms, train and learn how to use them safely, which is protected by the 2nd amendment  in the United States Constitution as well as the Virginia Constitution. We here at Showmasters still believe in the Constitution.

The Dulles Expo Center is 130,000 sq ft building and the Walmart beside us is an 80,000 sq ft. building, we are 50,000 sq ft. bigger. The Walmart beside us has one giant aisle and the all the rest of the aisles are an average of 6ft or less. We have wider aisles, 14 ft average, so we have more space to social distance. Also, our show and the building management are self-imposing a 50% occupancy limit.

We are bigger and better able to social distance. We limit our occupancy, everyone wears a mask and follows the COVID REQUIREMENTS. We have also had two shows already and have not been a super spreader. All we ask is that we are allowed to operate on the same type of business model and at the same level as the Walmart across the road. We are not entertainment and amusement. We will have at our show roughly the same number of people that will be going through any average Walmart in the state of Virginia and across the country every weekend.

The show takes months to put together and it is too late a notice for most of these businesses to recoup their losses. It will cause irreparable damage to all involved from the building, auxiliary businesses, the exhibitors, the promoter, the hotel, convenience stores, restaurants, and the strip mall. Exhibitors have significant investments in inventory, as do restaurants and convenience stores, much of which cannot be recouped. We will be releasing a GoFundMe and another type of crowdfunding for legal defense expenses. 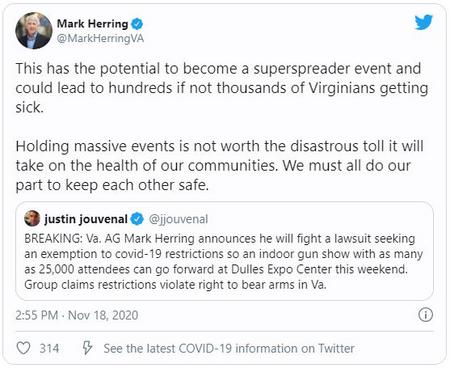 Mark Herrings Statement about the